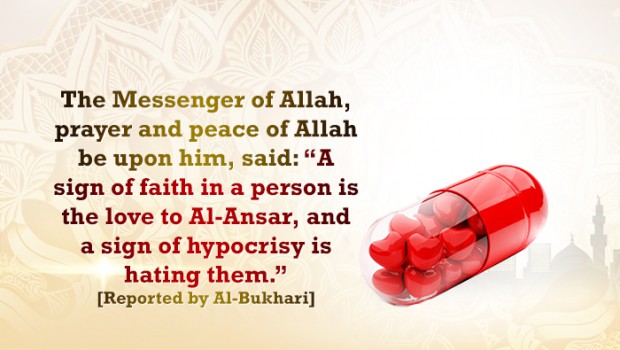 “Ansar” is an Arabic word which means “helpers”. The people of Medina, who welcomed Our Prophet (SAW) when he migrated from Makkah to Medina, are called “Ansar”.

What made the Ansar so special? They had several qualities and virtues that earned them this position.  On one occasion, Our Prophet (SAW) listed many of their virtues that made them so precious in the eyes of Allah. They had helped Our Prophet (SAW) and the Muhajareen (the Sahabah who had migrated from Makkah) when they needed help. They had welcomed them with open arms and had shared all their wealth, lands, houses and belongings with them. They had fought battles side by side with Muhajareen. That is why they were called “Ansar”, the helpers by Allah SWT.

None loves the Ansar but a believer, and none hates them but a hypocrite. So Allah will love him who loves them, and He will hate him who hates them

The occasion was the conquest of Makkah, when thousands and thousands of people embraced Islam.  Our Prophet (SAW) took an army of Muslims to fight with some hostile tribes of Arabia that lived quite near to Makkah. One major battle was the battle of Hunain.  The Muslims got hold of huge war booty, including camels, sheep and wealth. During the distribution of war booty, preference was given to the people of Quraish and people who had recently converted to Islam. This made the younger crowd of Ansar a bit sad. When news of the dissatisfaction of Ansar reached the ears of Our Prophet (SAW), he called all the Ansar to his tent and then delivered a sermon, which brought tears to all the Ansar. Here is how the incident is recorded in one hadith.

When Allah gave Allah’s Apostle what he gave of the properties of the Hawazin tribe as a war booty, the Prophet started giving some men 100 camels each. The Ansar (then) said, “May Allah forgive Allah’s Apostles as he gives to Quraish and leaves us although our swords are still dribbling with the blood of Quraish.” Allah Apostle was informed of their statement, so he sent for the Ansar and gathered them in a leather tent, and did not call anybody else along with them. When they all  gathered, the Prophet  (SAW) got up and said, “What is this talk being informed to me about you?” The learned men amongst the Ansar said, “O Allah’s Apostle! Our chiefs did not say anything, but some people amongst us who are younger in age said. ‘May Allah forgive Allah’s Apostle as he gives (of the booty) to Quraish and leaves us though our swords are still dribbling with their blood.” The Prophet (SAW) said, “I give to these men who have newly deserted heathenism (and embraced Islam) so as to attract their hearts. Won’t you be happy that the people take the wealth while you take the Prophet with you to your homes? By Allah, what you are taking is better than whatever they are taking.” They (i.e. the Ansar) said, “O Allah’s Apostle! We are satisfied.” The Prophet then said to them. “You will find others favoured over you greatly, so be patient till you meet Allah and His Apostle and I will be at the Tank then.” Anas added: But they did not remain patient.” [2]

When Allah gave to His Apostle the war booty on the day of Hunain, he distributed that booty amongst those whose hearts have been (recently) reconciled (to Islam), but did not give anything to the Ansar. So they seemed to have felt angry and sad as they did not get the same as other people had got. The Prophet then delivered a sermon before them, saying, “O, the assembly of Ansar! Didn’t I find you astray, and then Allah guided you on the Right Path through me? You were divided into groups, and Allah brought you together through me; you were poor and Allah made you rich through me.” Whatever the Prophet said , they (i.e. the Ansar) said, “Allah and his Apostle have more favours to do.” The Prophet said, “What stops you from answering the Apostle of Allah?” But whatever he said to them, they replied, “Allah and His Apostle have more favours to do.” The Prophet then said, “If you wish you could say: ‘You came to us in such-and-such state (at Medina).’ Wouldn’t you be willing to see the people go away with sheep and camels while you go with the Prophet to your homes? But for the migration, I would have been one of the Ansar, and if the people took their way through a valley or