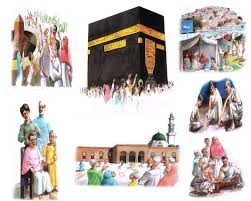 THE PILLARS OF ISLAM

Islam creates a bond between a believer, the follower of the religion, and the Creator, Allah,on a dialy, weekly, and annual basis. The daily basis is found in the daily five prayers. The weekly basis is apparent in the Friday prayer. The annual basis is demonstrated in the fasting of the month of Ramadan. But there is another no less important bond. It is the lifelong basis, which requires a Muslim to perform pilgrimage once at least in a lifetime. Not all Muslims are asked to perform it. It is obligatory for the financially  and physically able Muslim to do pilgrimage.

Pilgrimage means to visit Mecca during a specific time for the purpose of worship and carrying out certain rites. Pilgrimage takes place during the first nine to thirteen days of the lunar month of Dhul Hijjah. The Arabs had known pilgrimage to Mecca long before Islam, so it is not a new practice or  tradition. This proves that Islam has come to establish good practices, not only just fight bad ones. The philosophy of pilgrimage goes further on to extend the bonds with the previous heavenly religions, the father of which is Ibrahim. Also, pilgrimage is the annual Muslim congress where Muslims from all over the world meet  to know each other more. Like all other forms of worship, there are social, economic, cultural and even physical benefits to pilgrimage. Pilgrims make new friends and acquaintances. There is an active tourist industry, both in the sending, as well as the country hosting and custodying the two  Holy  Mosques, namely The Kingdom of Saudi Arabia. Pilgrimage is also a kind of recreation and scene- change, because pilgrims encounter different land escapes. In addition, pilgrims visit the places where Islam was born; the prophet grew, lived and died; the Holy Quran was revealed. Pilgrimage is recommended to be performed while a Muslim is young enough to enjoy the journey and endure the hardships of travel and living outdoors. A too old Muslim may find it rather hard to enjoy such a journey. teach arabic online

The actions of pilgrimage are fairly simple. For males, they are asked to take off all the sewn clothes and put on only two pieces of cloth, instead. This is very symbolic, on the one hand all pilgrims look literally alike and consequently equal, and on the other hand, they look as if wearing their white coffins alive. This makes Muslims realize that life is short , and consequently work for the life to come. Leaving behind all their capitals, interests and their daily tasks, aspiring to reach Allah’s content and satisfaction, teaches Muslims the virtue of asceticism. Asceticism means to abandon what you have or need, despite your ability to own and acquire it. Thus pilgrimage makes a Muslim needless of many things and able to do without various necessities.

Females aren’t asked to alter their usual way of dress, hence allowing them a great deal of ease and comfort. Here Islam shows itself as a practical and easy religion which cares for the welfare of its followers. Unlike some other creeds, Islam assures that the worshipped One doesn’t benefit from or enjoy our pains or suffering. After  Ihram, being ready to pilgrimage, pilgrims perform Tawaf Al Qudum ,as a kind of greeting to Al-Kaaba and the Holy Mosque,  pilgrims optionally gather in Minna on the eighth day of Dhu Al Hija, on a day called the day of Tarwyya, an Arabic word which has two meaning; either watering oneself as well as one’s cattle, or narrating the actions of pilgrimage to all pilgrims, reminding the veterans who have done pilgrimage before, or teaching the new pilgrims what they are about to do.  teach arabic online

On the ninth of Dhu Al Hija, pilgrims head for Arafa, a place outside Mecca, where they spend the day till sunset, performing the main pillar of pilgrimage. They are recommended to pray and ask Allah to endow them His favours. But it  is notable to say that a Muslim’s attending the day at the required place is the rite itself. At sunset, pilgrims head for Muzdalifa, where they spend the night, after praying the Eve, Maghrib, and the night, EIsha, prayers; annexed and abridged together. There they collect  small stones, the size of a bean each, preparing for the rite of stone throwing at Minna, the following morning. On the tenth of Dhu Al- Hija, pilgrims go to Minna where they throw stones at three stone pillars, in obedience to their Lord and for the torture and agony of their eternal enemy Satan. The three stone pillars stand for the devil who had tried to tempt Hajar into making her influence her aging husband, Ibrahim,  not to slaughter her only son, Ismail on the orders of his Lord. teach arabic online

After this, pilgrims head for Mecca to perform Tawaf Al- Ifada, the Tawaf of conclusion, which declares the completion of  the pilgrimage actions. Next, pilgrims either shave their hair or shorten it. This is for males, but females just trim the end of their hair. Having reached this stage, pilgrims can end their Ihram, by resuming their usual way of dress. Finally, they linger for two or three extra days to throw stones. It is remarkable that there is a great deal of flexibility in Pilgrimage as to the order of rituals. The prophet, when he was asked for permission of any kind and he replied, ‘Do, it is permissible. ’teach arabic online

There are many verses and Hadiths denoting the importance, virtue and favour of pilgrimage. The Holy Quran says that : ‘ And call people to perform pilgrimage, so that they get a lot of benefits. Who gives the due respect and importance to Allah’s rituals, it is a sign of their hearts’ piety.’ Prophet Mohammd said on many occasions, things like: ‘ The perfect pilgrimage has only one reward,paradise’. Pilgrim returns home, like a newly born baby void of  all sins.