sharesShare on FacebookShare on TwitterShare on WhatsApp
7
Fitnah

The 3 Fitan Before Dajjaal

The Prophet صلىاللهعليهوسلم related to us that the Hour will not begin until is preceded by three tribulations. 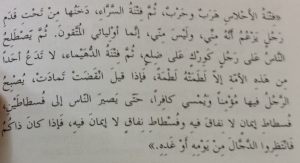 ‘Abd-Allah ibn ‘Umar رضياللهعنه said: “We were sitting with the Messenger of Allah صلىاللهعليهوسلم  and he mentioned tribulations, speaking at length about them, until he mentioned Fitnat Al-Ahlaas (a tribulation which will be lengthy and intense). Someone asked, “Messenger of Allah صلىاللهعليهوسلم , what is Fitnat Al- Ahlaas?”

He صلىاللهعليهوسلم said.
“People will flee losing their property and families. Then Fitnat Al-Sarra’ (a tribulation caused by luxury and a life of ease) will come which will be caused by a man from among my family, who will claim that he is from me but he will not be of me, for my friends are the pious. Then the people will unite under a man like a hip bone over a rib (i.e. unstable). Then the Fitnat Al-Duhayma (huge tribulation) will come, which will not leave anyone of this Ummah without giving him a slap. When it is said that it is over, it will be extended, and a man will be a believer in the morning and a disbeliever in the evening, until the people are split into two camps: a camp of Faith in which there will be no hypocrisy and a camp of hypocrisy in which there will be no Faith. When that happens, expect the Dajjaal on that day or the next.

Recorded by Abu Dawood: classified as Saheeh by Al-Albaani in Al-Silsilah Al-Saheehah, no 972

1. (Fitnat) Al-Ahlaas is the plural of hils, which is a cover placed on the back of  the camel under wooden saddle. This cover stays on the camel at all times, and this Fitnah or turmoil will stay with the people and not leave; it will be black and dark like the hils.

“Fleeing” means, people will flee from one another because of enmity, hostility, and fighting.
“Losing their property and families” means, a man’s property and family will be confiscated and he will be left with nothing.

2. Fitnat Al-Sarra’ refers to blessings that would make a person, such as good health and well-being, but some will be tempted and will get carried away with sin.

“Will be caused by Dukhnuha (lit. its smoke [will come from])” means, it will appear and be stirred up. It is likened to smoke (Dukhaan) that arises from fire when damp wood is thrown onto it.
“It will be caused from a man from among me.” meaning from the family of the Prophet صلىاللهعليهوسلم. This means he is the one who will start this trouble or he will be in control of it.
“Claiming that he is of me.” meaning, he will claim to be a descendant from the Prophet صلىاللهعليهوسلم but he will do abhorrent deeds; I [i.e. the Prophet صلىاللهعليهوسلم] disavow his actions. Even if he is from my family, he is not one of my close friends, rather my close friends are the pious, but this man will be the cause of turmoil.
“He is not of me,” means, he is not one of my close friends, because he stirs up turmoil. This is similar to the Verse in which Nooh  عليه السلام said: “Verily, my son is of my family.”  Allah سبحانه و تعالى said:

“Then the people will unite under a man” means, they will agree to swear allegiance to a man.
“Like a hip bone over a rib,” meaning people’s affairs will not stabalise under this man, because the hip bone is heavy and the rib bone is small and weak. So the people will agree after having differed, and unite under a man who is not qualified to rule, has little knowledge and wisdom, and cannot run the affairs of society or keep them sound.

3. Fitnat Al-Duhayma means the comprehensive turmoil that is dark, immense, and confusing.
“Without giving him a slap.” means it will not leave anyone except some trial or calamity falling them. A slap is a blow to the face, and its meaning is that effect of this huge tribulation will encompass all people.
“When it is said that it is over,” meaning, when the people imagine that turmoil has ended.
“It will be extended,” meaning that it will increase and persist
“He will be a believer in the morning and disbeliever in the evening,” meaning that in the morning he regard the blood of his brother who has not transgressed against his honour and wealth as Haraam, but in the evening he will regard it as permissible, transgressing against him. This has already discussed in details above. (See minor sign 51).
“Into two camps,” means two groups, or it is said two cities.
“The camp of Faith in which there will be no hypocrisy,” meaning it is pure and sincere Faith.
“The camp of hypocrisy in which there will be no Faith,” meaning it will contain deeds of the hypocrite, such as lying, betrayal, breaking promises, and so on.
“Then expect the Dajjaal,” meaning expect his appearance.

… We ask Allah سبحانه و تعالى to protect us from their evil.

From the book The Last Apocalypse: An Islamic Perspective by A.R. Kemali