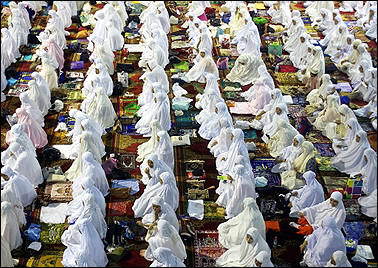 Islam has honoured woman and made her equal with man as regards obligatory acts of worship. Women are also encouraged to attend public gatherings on Eid al-Fitr and Eid al-Adha, so that they may take part in these blessed occasions. This is demonstrated in a number of Hadith reported by Bukhari and Muslim, in which we see that the Prophet (PBUH) commanded that all the women should come out on these occasions, including adolescent and prepubescent girls, those who usually remained in seclusion, and virgins; he even commanded that menstruating women should come out, to take part in the joyous occasion, but they were to keep away from the prayer-place itself. His concern that all women should attend the prayer on the two Eids was so great that he ordered the one who had more than one jilbab (outer garment) to give one to her sister who had none. In this way he encouraged both the attendance of all women at Eid prayers and mutual support and help to do good and righteous deeds.

“The Messenger of Allah (PBUH) commanded us to bring out to the Eid prayers the adolescent and prepubescent girls, those who usually remained in seclusion, and virgins, and he ordered those who were menstruating to keep away from the prayer-place.”

“We (women) used to be commanded to go out on the two Eids, including those who usually stayed in seclusion, and virgins. The menstruating women went out too, and stayed behind the people, joining in the takbirat.”

“The Messenger of Allah (PBUH) commanded us to take them out on Eid al-Fitr and Eid alAdha, the adolescent and prepubescent girls, the menstruating women, and those who usually remained in seclusion, so that they could share in the festive occasions of the Muslims, but the menstruating women were not to pray. I said, `O Messenger of Allah (PBUH), one of us does not have a jilbab.’ He said, `Let her sister dress her in one of her own jilbabs.'”

“Muhammad ibn Sallam told us that `Abd al-Wahhab reported from Ayyub from Hafsah bint Sirin, who said: “We used to prevent our prepubescent girls from going out on the two Eids'”.

A woman came and stayed at the castle of Banu Khalaf, and reported something from her sister. Her sister’s husband had taken part in twelve military campaigns with the Prophet (PBUH), and her sister herself had accompanied him on six of them. She said: “We used to take care of the sick and wounded.” Her sister asked the Prophet (PBUH): “Is there anything wrong if one of us does not have a jilbab and never goes out for that reason?” He said: “Let her friend give her one of her jilbabs, so that she can come out and join the righteous gatherings of the Muslims.”‘ Hafsah said: `When Umm `Atiyyah arrived, I went to her and asked her, “Did you hear the Prophet (PBUH) say that?” She said, “May my father be sacrificed for him, yes I did. [She never mentioned him without saying “may my father be sacrificed for him”]. I heard him say, `Let the young girls who usually stay in seclusion, or the young girls and those who usually stay in seclusion, and the menstruating women, go out and attend the righteous gathering of the believers, but let the menstruating women keep away from the prayer-place itself.'”‘ Hafsah said: `I asked her, “Even the menstruating women?” She said, “Yes, are menstruating women not present at `Arafah and on other occasions?”‘”

Bukhari also narrates another report from Umm `Atiyyah, in which she says:

“We used to be commanded to go out on the day of Eid, and we even brought the virgins out of their seclusion, and the menstruating women, who would stay behind the people, joining in their takbirat and du`a’s, hoping for the blessing and purity of that day.”

These sahih Hadith give a clear indication of the Prophet’s concern for the intellectual and spiritual benefit of women. He ordered all the women to go out to the Eid prayer, including those who were menstruating, even though menstruating women are excused from praying and are not allowed to enter the prayer-place itself. But his call was addressed to all women, because of his concern that they should take part in these two blessed events and attend the righteous gathering of the Muslims, joining in the takbirat and du`a’s, and being a part of the public life of Islam which is discussed in the khutbah following the Eid prayer.

The Prophet (PBUH) was concerned with the teaching and guidance of women, and wanted them to play a part in building the Muslim society, so he devoted part of his khutbah to women. He would come to the place where the women were gathered, and exhort and remind them, and he made doing this a duty of the imam. We find this in a hadith narrated by Bukhari and Muslim from Ibn Jurayj, who said:

“`Ata’ told me: “I heard Jabir ibn `Abdullah say: `The Prophet (PBUH) stood up on the occasion of Eid al-Fitr and led the people in prayer. He began the prayer before the khutbah. Then he addressed the people. When the Prophet of Allah (PBUH) had finished his khutbah, he came to the women and spoke to them, whilst leaning on Bilal’s arm, and Bilal spread out his cloak for the women to put their sadaqah in it.'”

I [Ibn Jurayj] said to `Ata’, `Was it zakat al-fitr?’ He said, `No, it was the sadaqah that they gave at that time; one woman threw her ring into it, then others followed her lead.’ I said to `Ata’, `Is it a duty nowadays for the imam to come to the women and address them when he has finished his khutbah?’ He said, `It most certainly is. This is a duty on them (imams); what is wrong with them that they do not do that nowadays?'”

According to this hadith, the Prophet (PBUH) exhorted and reminded the women, and accepted the sadaqah that they themselves willingly gave. Another hadith, also narrated by Bukhari and Muslim from Ibn `Abbas (RAA) via Ibn Tawus adds that the Prophet (PBUH) also reminded the women of their bay`ah (oath of allegiance) and reconfirmed their adherence to it. Ibn `Abbas said:

“I attended Eid prayers with the Prophet (PBUH), and (after his death) with Abu Bakr, `Umar and `Uthman. All of them used to perform the prayer before the khutbah. The Prophet (PBUH) came down (from the minbar) – and it is as if I can see him now, gesturing to them to sit down – then he would come through the crowd, until he reached the women. Bilal was with him, and he recited: ( O Prophet! When believing women come to you to take the oath of fealty to you, that they will not associate anything whatever with Allah . . .) (Qur’an 60:12), until the end of the ayah. Then he said, `Are you adhering to that?’ Only one woman answered, `Yes, O Prophet of Allah (PBUH),’ and he did not know at that time who she was. He said, `Then give sadaqah,’ and Bilal spread out his cloak. The Prophet (PBUH) said, `Come on, may my father and my mother be sacrificed for you!’ So they began to throw their rings and jewellery onto Bilal’s cloak.”

There is no doubt that the Prophet (PBUH) addressed the women in the Eid prayer-place, reminding them about their religion, and that he took charity from them, reconfirmed their adherence to their oath of allegiance, enjoined them to remember the teachings of Islam, and motivated them to do good works. All of this was achieved by calling them to attend the congregational prayer on both Eids. This is indicative of the importance of congregational prayer in the life of the Muslim individual and the Islamic society.

Although Islam does not oblige women to attend congregational prayer in the mosque, whenever women gather together, they are encouraged to offer the fard prayers in congregation. In this case, the one who is leading them in prayer should stand in the middle of the (first) row, not in front, and they do not have to recite the adhan or iqamah. This is what Umm Salamah, the wife of the Prophet (PBUH), used to do when she led other women in prayer.

Extracted from the book The Ideal Muslimah