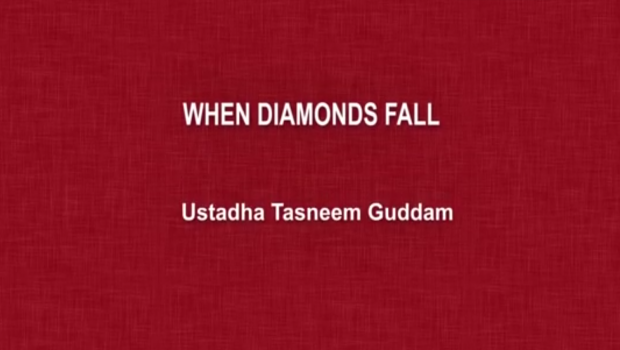 Recording: WHEN DIAMONDS FALL | Struggles of Muslim Women in the West by Ustadha Tasneem Guddam

typo error on video, it is supposed to be spelt 'Struggle' not Stuggle

Are you finding it difficult to embrace who you are or who you are supposed to be as a Muslimah and a woman? Are the expectations of womanhood too high to reach? This talk will address the common struggles of Muslim women inside and outside the home from a woman's perspective. It will also shed some light on the reasons behind common hidden problems some Muslimah's face.

This lecture will also discuss the history of Muslim women and the connection between the past and present and it will add many factors to the positive and negative influences around us. However, through the struggles and hardship a Muslim woman faces, she must know and remember her quality as a diamond. A Muslimah is a diamond, the more you take care of her the more she shines, illuminating her community and family. But what happens when Diamonds fall? In order to for a diamond to shine it must be known how to preserve her inner strength and protect her from those who do not understand her value. In order for her to remain strong she must be enriched with the value of who she is, shielding her from the stumbles and obstacles she within her environment.

Ustadha Tasneem Guddam at the age of 15 she travelled to Yemen, where she completed her school in Arabic and studied Quran and Tajweed under a Sheikha who she spent two years with and eventually completed memorizing the Quran. She then studied “Al-Qaida Al Noorania’ from a Saudi sheikh, Sheikh Muhammad Farooq al Rai and she completed a full course with and was rewarded with a qualification to teach Qaida in his school for two years. She then moved onto studying Sharia for four years in The University of Al-Iman in Sanna, where she studied a variety of different subjects Including Tafseer, hadeeth, Arabic, Aqeeda, Fiqh, Islamic History, Scientific miracles of the Quran, Seerah, Tajweed , Tazkia (purification of the soul) and Wiratha (i.e. The Science of Islamic Inheritance < on a basic level) . She studied Sharia on the hands of thirty odd sheikhs and five sheikha’s , and was also encouraged to revise the Quran for 4 years on the hands of Sheikh Ismail Abd Al A’al and Sheikh Saleh Abdullah. In addition to this she taught Quran and Tajweed to women for the two last years while she was studying in the University as part of the University’s practical requirements.