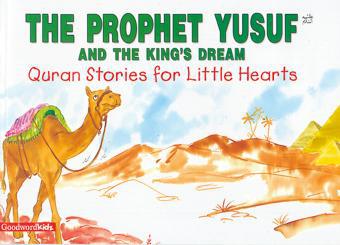 Quran Stories for Little Hearts – Story of Yusuf (as) Part 1

As I opened the door and greeted my son with salaam, I could sense he was upset about something. As I asked him to change and set lunch before him; he ate in silence. When he was finished, I asked him what was bothering him. At first, he said that there was nothing wrong but soon spilled the beans. He was working with a group of students for a science project and was the major contributor towards its development. The group had tried to hijack his project and had tried to get all the credit.

“I could have understood all of them, Mom,” he said, “but Ali! Ali is my best friend! How could he do that to me?”

I smiled and told him that unfortunately, it was quite a common occurrence; even prophets of Allah had faced problems like these; in fact much worse. He looked at me in disbelieve. It was then I started telling him the story of Yusuf, the prophet of Allah.

The group had tried to hijack his project and had tried to get all the credit. “I could have understood all of them, Mom,” he said, “but Ali! Ali is my best friend! How could he do that to me?”

“We relate unto you (Muhammad (SAW) the best of stories through Our Revelations unto you, of this Qur'an. And before this (i.e. before the coming of Divine Inspiration to you), you were among those who knew nothing about it.”[1]

And so, the story of Yusuf (AS) is one of the best stories of the Quran.

“Abu Huraira reported: It was said to Allah's Messenger (SAW) as to who was the most worthy of respect amongst people. He said: The most God-conscious amongst you They said: It is not this that we are asking about, whereupon he said: Then he is Yusuf, the Apostle of Allah and the son of Allah's Apostle, Ya’qoob, who was also the son of Allah's Apostle, the friend of Allah (Ibrahim) They said: This is not what we are asking you. He said: You mean the tribes of Arabia? Those who are good in pre-Islamic days are good in Islam (after embracing Islam) when they get an understanding of it.” [2]

Prophet Ya’qoob (AS) had twelve sons from two wives; ten from one wife, two from the other.

Yusuf (AS) had been bestowed with exceptional beauty, patience and wisdom. When he was quite young, he once had a strange dream. He discussed the dream with his father;

“(Remember) when Yusuf (Joseph) said to his father: "O my father! Verily, I saw (in a dream) eleven stars and the sun and the moon, I saw them prostrating themselves to me." [3]

His father, Ya’qoob (AS) realized that his son had been chosen from his family to be the next Prophet of Allah. He realized that Yusuf (AS) was going to attain a position so high that he parents (the sun and moon in the dream) and his brothers (eleven stars in the dream) would prostrate before him in honour. I explained to my son that it was allowed to prostrate before someone to show him honour; but now it was completely forbidden in our shariah. Now we can only prostrate before Allah Subhanahu wa Ta’ala, and no one else.

"Thus will your Lord choose you and teach you the interpretation of dreams (and other things) and perfect His Favour on you and on the offspring of Ya'qoob (Jacob), as He perfected it on your fathers, Ibrahim (Abraham) and Ishaq (Isaac) foretime! Verily, your Lord is All-Knowing, All-Wise." [4]

“When they said: "Truly, Yusuf and his brother are loved more by our father than we, but we are 'Usbah (a strong group). Really, our father is in a plain error” [5]