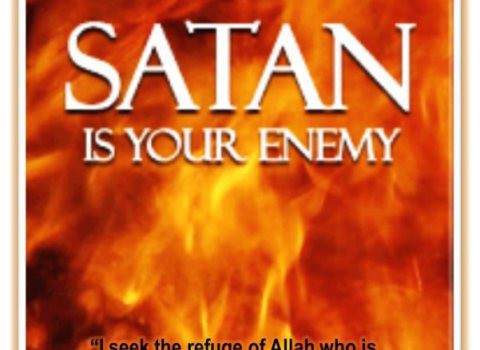 Why Did Allah create Iblees (Shaytan)?

Allah Subhana hu wa Ta’la is Al-Aleem and Al-Baseer. He has the knowledge of everything; past, present and the future. Why did Allah create Iblees (Shaytan) if He knew Iblees would disobey him, would not bow before Adam (AS) to show honour and would try to trick all the believers into disobeying Allah including Adam (AS)? There is an explanation for the creation of Iblees, too, just like everything else because Allah has created everything for a reason.

Iblees disobeyed Allah by not bowing before Adam (AS) when he was ordered by Allah to do so. Not only this, he also tricked Adam (AS) into disobeying Allah by eating the forbidden fruit. So why was Iblees termed as “Kaffir” or non-believer while Adam (AS) was not? What is the difference between these two acts of disobedience towards Allah?

When Adam (AS) disobeyed Allah, he realized his mistake. He repented over his mistake and begged for forgiveness in words that were taught by Allah Subhana hu wa Ta’ala Himself;

They said: “Our Lord! We have wronged ourselves. If You forgive us not, and bestow not upon us Your Mercy, we shall certainly be of the losers.” [1]

And so Adam (AS) and Hawwa(AS) were forgiven. But Iblees disobeyed Allah by not bowing before Adam (AS) and when Allah Subhanahu wa Ta’ala asked him why he hadn’t bowed as ordered, he was not ashamed of his mistake. Instead, he insisted that he would not bow before Adam(AS) as he was superior to him as Adam(AS) had been made from clay while he, Iblees had been made of fire.

Iblees’ insistence on his sin actually showed that he believed that Allah Subhana hu wa Ta’ala had committed a mistake (Nauozo billah) by ordering a superior to bow before an inferior person. His insistence on sin and his belief that Allah had committed a mistake made him a non believer, a Kaffir. On the other hand, his trickery showed another aspect of human nature; repentance over a mistake which would not have come to light had Iblees not been created.

There is a great lesson in this for all of us. Allah loves being asked for forgiveness and mercy. As humans, we are bound to commit sins. It is essential that we repent over our mistakes, ask Allah’s forgiveness and try to stay away from sins.

Abu Hurayra reported that the Messenger of Allah, may Allah bless him and grant him peace, said, “By the One in whose hand my soul is, if you did not do wrong, Allah Almighty would remove you and bring a people who do wrong and then ask Allah Almighty for forgiveness and He would forgive them.” [2]

Anas said, “I heard the Messenger of Allah, may Allah bless him and grant him peace, say, ‘Allah Almighty says, “O son of Adam! I will forgive you as long as you call on Me and have hope in Me, no matter what you do. Son of Adam, I do not care if your wrong actions reach to the clouds of heaven and then you ask Me for forgiveness, I will forgive you. Son of Adam, if you were to come with sins equivalent in weight to the whole earth and then meet Me having not associated anything with Me, I would come to you with the same amount of forgiveness.'” [3]

We should always remember that it is only human to err and divine to forgive.