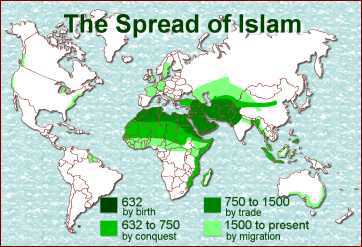 Was Islam Spread By Sword?

This is a question that Muslims are often faced with particularly if they are keen on carrying out Dawah. It is a question that demands our attention and deep understanding. First and most importantly, we should understand that Islam was not spread by sword or force; however, the Islamic Empire or Khilaafat certainly was spread by force. Does that mean that Sahabah رضي الله الهم exercised force to make others Muslim? No, they did not. They not only conquered the lands, but also conquered the hearts of the natives by their personalities because they practiced what they preached. They only followed the teachings of Allah  سبحانهو تعالى and Prophet Muhammad صلى الله عليه وسلم .

Allah’s Messenger صلى الله عليه وسلم said, “I have been ordered to fight the people till they say: ‘None has the right to be worshipped but Allah.’ And if they say so, pray like our prayers, face our Qibla and slaughter as we slaughter, then their blood and property will be sacred to us and we will not interfere with them except legally and their reckoning will be with Allah.” Narrated Maimun ibn Siyah that he asked Anas bin Malik, “O Abu Hamza! What makes the life and property of a person sacred?” He replied, “Whoever says, ‘None has the right to be worshipped but Allah’, faces our Qibla during the prayers, prays like us and eats our slaughtered animal, then he is a Muslim, and has got the same rights and obligations as other Muslims have.”[1]

The Sahabah رضي الله الهم believed that as Islam is the true word of Allah سبحانهو تعالى , everyone should accept it to be safe from hell fire. Whenever, they were faced with a non believing enemy, they presented three conditions according to the teachings of our Prophet Muhammad صلى الله عليه وسلم :

Thus, they waged many wars against non-believing nations, but when they were victorious over them, they did not harm them, nor did they force them to convert to Islam. Instead, their pious and kind nature always won the enemies’ hearts and they accepted Islam by their own free will.

The Prophet صلى الله عليه وسلم  said, “Allah wonders at those people who will enter Paradise in chains.” [2]

Who would be those people being brought in chains to Jannah? According to Sunan Abu Dawood, Kitab ul Jihad,

“This means that in a battle some unbelievers are captivated and led to Muslim territory in chains. Later on they embrace Islam and thus enter Paradise by virtue of their belief.”

The following hadith proves this point.

So we must be very clear on this point that the Islamic Government grew in size by force but the number of Muslims increased because of the true word of Allah سبحانه  و تعالى. If it were not the case, how would we justify the masses that are accepting Islam when there are no longer wars being waged against them?

Allah سبحانه  و تعالى says: “Let there be no compulsion in religion`’ [4]