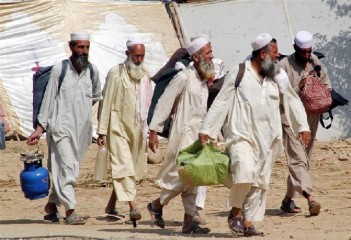 QUESTION: I have started to become committed recently, praise be to Allaah. In our area there is the Jamaa’at al-Tableegh, who go out for thirty days or more. People say different things about them. Some say, don’t go out with them, because their going out is an innovation (bid’ah) and they have some mistaken ideas. Others advised me to go out with them. What is the correct view concerning that? Should I go out with them or not?

ANSWER: Praise be to Allaah.

Shaykh Ibn ‘Uthaymeen (may Allaah have mercy on him) was asked about that and he said:

I think that there is some good in this group; they call others to Islam and have a clear influence that no other daa’iyahs have had. How many kaafirs have become believers at their hands, and how many evildoers has Allaah guided through them?

Moreover they have an attitude of humility and selflessness that is not found in many others.

Some people say that they have no knowledge of hadeeth, and so on.

They are undoubtedly good people, but I think that those of them who are in Saudi do not go to Pakistan or other countries, and we do not know anything about the ‘aqeedah of those people (in other countries) or their manhaj (methodology). But there is nothing wrong with the manhaj followed by our companions here in Saudi.

With regard to limiting da’wah to three or four days, or to two or four or six months, or two years, there is no shar’i evidence for that. But they think that this has to do with organization. If a person goes out for three days, and knows that he is limited to these three days, he will focus his mind and forget about worldly matters. This is the matter of organization, and is not an act of worship or a matter of sharee’ah.

I think, may Allaah bless you, that if you have the opportunity to seek knowledge then it is better to do that, because seeking knowledge is good and the people nowadays have a great need for scholars who have knowledge of the Sunnah and who are well-versed in knowledge. If you are not able to seek knowledge, and you go out with them in order to purify yourself, there is nothing wrong with that. There are many people whom Allaah has guided at their hands.

And Allaah is the Source of strength