sharesShare on FacebookShare on TwitterShare on WhatsApp
Hajj & Umrah 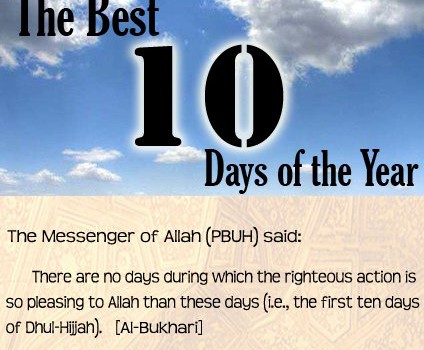 The Best 10 Days of the Year – Dhul Hijjah

And the Best Days of the Year…

“There are no days during which deeds are better to Allaah than these (ten) days.” They asked: “Not even Jihad (for the sake of Allaah)?” He صلى الله عليه وسلم replied: “Not even Jihad except if a person who went out (for Jihad) with his self and wealth and came back with none (i.e. died in battle).” [Al-Bukhari, 969]

Ibn Rajab said: “It appears and Allaah knows best, that good deeds practiced during these ten days are superior to any other ten days during any other month.” [Al-La’taif al Ma’arif]

2. Recommended to be involved in a lot Dhikr:

“And mention the Name of Allaah on appointed days” [Al-Hajj: 28]

Ibn Rajab said: “The majority of the scholars view the “appointed days” as the ten days of Dhul Hijah.”

“There is no days better to Allaah, when deeds done therein are more beloved to Him than in these ten days (of Dhul Hijjah). Therefore, increase (frequently) therein the Tasbeeh and Tahleel and Tahmeed and Takbeer.” [Mu’jam al-Kabeer, 3/110; Musnad Ahmad, Abu Uwaanah and others – graded as saheeh by Al-Haythami, Al-Mundhiri and Shu’ayb Arna’oot]

“There is no day in which Allaah عزوجل frees more of His slaves from Fire than the Day of Arafah, and He verily draws near, then boasts of them before the Angles, saying: ‘What do they seek?’”

3. They are included in the days Allaah appointed for Musa عليه السلام

“And We appointed for Musa thirty nights and added (to the period) ten (more), and he completed the term, appointed by his Lord, of forty nights”[Al-A’raf: 142]

4. Allaah completed His Deen on the 9th.

“This day, I have perfected your religion for you, completed My Favour upon you, and have chosen for you Islam as your religion” [Al-Ma’idah: 3]

Umar bin Al-Khattab رضي الله عنه said: “By Allaah, I know the day this Ayah was revealed to the Messenger of Allaahصلى الله عليه وسلم … It was the eve of the Day of Arafah, on a Friday.” [Bukhari]

5. The sacrifice is done on the Eid and this is the Sunnah of Ibraheem عليهالسلام

6. Allaah frees more slaves from the fire on Arafah  than any other day.

“There is no day in which Allaah عزوجل frees more of His slaves from Fire than the Day of Arafah, and He verily draws near, then boasts of them before the Angles, saying: ‘What do they seek?’” [Saheeh Muslim, 1348]

7.  There is great virtue in Fasting on the 9th.

The Prophet صلى الله عليه وسلم was asked about fasting on the Day of Arafah (i.e. 9th of Dhul Hijjah *) and he said:

He صلى الله عليه وسلم said, “Allaah will expiate (the minor sins) of two years: the preceding year and the one after.” [Saheeh Muslim, 1162]

9. These are the days for Hajj.

10. Allaah Swears by these days.

The Prophet صلى الله عليه وسلم said, “The ten are the ten days of Dhul Hijjah and the odd is the Day of Arafah and the even is the Eid.” [Musnad Ahmad, 3/ 327 and Bazzar, 2286 – Ibn Rajab graded the isnad as Hasan]

1. Shaykh Abdullah ibn al-Fawzan said: “Remembering Allaah during the ten days of Dhul Hijjah is among the righteous deeds that can be practised, along with making abundant du’a and seeking Allaah’s forgiveness. In fact these deeds are legislated to be practised all the time. The Dhikr of Allaah can be achieved by saying, ‘La-iIlaha illAllaah’ and ‘Allaahu Akbar’ and ‘Al-Hamdulillah’ and ‘Subhanallah.’” [Majalis al-Ashr Dhul Hijjah]

2. Imam At-Tahawi said: “How is it that good deeds during these ten days have such high merit as the Prophet صلى الله عليه وسلم mentioned, however he did not fast during them. And fasting is among the most virtuous of deeds?

Answer: It is possible that he didn’t fast the ten days of Dhul Hijjah from what A’ishah رضّى الله عنها narrated. She said, “Whenever he fasted he would not regularly practice other deeds which were greater to Allaah.” Performing Salah, making Dhikr and reading the Qur’an are all greater in merit than fasting (in these days).

Ibn Mas’ood رضي الله عنه said, “Praying is more beloved to me than fasting.” Therefore based on what A’ishah رضّىاللهعنها narrated that he صلى الله عليه وسلم didn’t fast those days as he was busy performing other acts of ibadah. These other acts are higher in value than fasting; nonetheless, fasting during these ten days is an enormous and righteous act of worship. Especially, as this hadeeth states that – acts done during these ten days are more beloved to Allaah than any other days – Based on this hadeeth, there isn’t anything that prevents the Muslim from fasting therein, in particularly if he has the ability to fast and perform other acts of worship to draw closer to Allaah.” [Sharh Mushkil al-Athar by At-Tahawi]

And Tawfeeq is from Allaah سبحانه و تعالى alone.