sharesShare on FacebookShare on TwitterShare on WhatsApp
Video 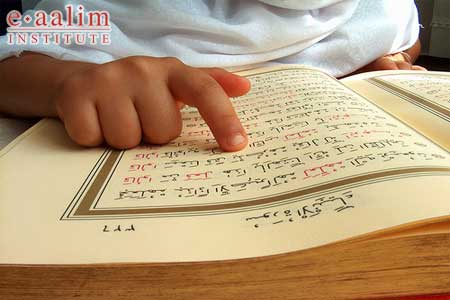 The Work of Shaytan (Complete) | Subtitled” Quran with tajweed Teaching “

There is the narration I owed you

So, shaitan plants himself right above the heart of the human being, of the son of Adam

And as soon as the human being becomes lax, careless, heedles and forgetful

He puts in waswasa

And as soon as he remembers Allah…

He takes a step back

So when you remember Allah, shaitan takes a step back

And he never stops

It is not like he sees an opening and he says, “Yeah…I’m tired today. I don’t want to do waswasa today…”

He doesn’t do that

And why he doesn’t do that, we’re going to learn in this ayah

He never takes a break

He will not take a break from making you forget

He is working hard

He is working harder than any of us

So we have to fight back hard

It’s not something that comes casually

You know, on” Quran with tajweed Teaching “
e of the easiest manifestations of shaitan is ego

Anger is a manifestation of what?

And shaitan is very good at making you angry

Have you ever seen a Muslim brother gets really angry?

What are you supposed to remind him? We’ll say what?

Shaitan is really good with this guy. You know what he does?

What are you saying? I’m possessed by shaitan?

And he gets even more angry

And shaitan is sitting there laughing, “I got him good!”

So, he’s good at what he does and we have to be able to…

And it takes humility, right?

It takes humility to take a step back and say, “You know what? Shaitan is whispering.”

It’s not me, it is iblees that’s whispering to me

It’s not something I should be taking on myself

So I should take a step back and say, “A’udhu billahi min ash shaytanir rajim”

Another narration, this is a very important narration to understand

There so many lessons in this one

So, the Messenger(pbuh) goes in the night and he is returning his wife Safiyah(ra), the mother of the believers to her home

And on the way in the dark, they saw two of the Ansar

So here is the Messenger(pbuh), here is his wife(ra) and there are two of the Ansar that are walking by

Now, the Messenger(pbuh) tells his spouse to stop

And he tells them(Ansar) to stop, so they stop

And the sahaba were like, “Why are you explaining to us who that is?”

So the sahaba said, “SubhanAllah! Ya Rasulallah!”

Why did they say “SubhanAllah! You don’t have to explain to us”

“Shaitan flows in the son of Adam like the flowing of blood.”

“And I fear that he will put, he will launch something into your hearts.”

What is that hadith teaching us?

The Messenger(pbuh) is cautious of the waswasa of shaitan

Especially for the believers, when it comes to them getting waswasa against who?

The sceptism about the Sunnah…

…is waswasa of the shaitan against the Messenger(pbuh)

…is waswasa of the shaitan against the Messenger(pbuh)

And people fall victim to it

This waswasa is introduced to you (in this surah)

This surah tells us to look out for waswasa from two sources. From what two sources?

“from jinns and human”

And they will quote all these ahadith, “Look what your messenger did!”

They don’t remember Allah much and the vacancy is there

They read that garbage and what happens?

Shaitan pours right in, puts the waswasa in and their iman is shattered

Their iman is gone

The easier attack is not to attack iman in Allah

You know what the easier attack is?

Iman in the Messenger(pbuh) of Allah

Accepting Allah is one thing, accepting the Messenger(pbuh) is even further humility

Because you have to accept the human being’s authority now

Who’s gonna be telling you what Allah wants from you

And this waswasa comes in a time, where we are living in a time of inflated ego

It is very easy to let that get in the way

That’s really the psychological origin of “I like Qur’an but Sunnah? I don’t know”

“Qur’an is from Allah, I can accept that much humility.”

“But humility to a human being, to a messenger? Oh, I don’t know!”

“His job was just to deliver.”(ma’adhAllah)

“I don’t have to take that seriously”

This is the attitude that is developed

You’ll find even subconsciously people will say, “Brother, I heard this is haram”

You know what they don’t say?

“Is it in the Qur’an or in the Sunnah?” No, Sunnah is out

That’s the attitude that is developed, subhanAllah!

This is waswasa of shaitan

This is a big waswasa of our time

But shaitan is just that powerful

If he is that powerful against the Ansar

We have to be careful

We have to watch out

The nobility and the honouring of Allah’s Messenger(pbuh) and his place in our iman, in our aqidah

You know when you say something inappropriate about Allah’s Messenger(pbuh), all of your iman is gone

Root, Branch, And Taboo Questions – How to Answer All Questions About Islam? →

The Presence of Interstellar Matter | Miracles of the Quran →

Animals and Birds Live in Communities | Miracles of the Quran | Subtitled →

Barrier between Sweet and Salty Waters | Miracles of the Quran | Subtitled →

UNBELIEVABLE: Reason of The Repetition In Surah Ar Rahman : Linguistic Beauty of Quran →