sharesShare on FacebookShare on TwitterShare on WhatsApp
Quran 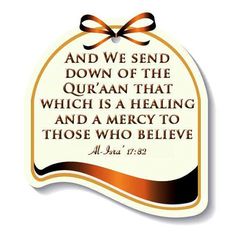 Qur’an as a Healer and a Cure

“O mankind, there has to come to you advice (instruction) from your Lord and healing for what is in the breasts and guidance and mercy for the believers.”

“And it is a healing cure for what is in the chests (of mankind), meaning: from (the diseases of) doubt and distrust, and it cleanses from whatever there is of impurity and dirt.” [Tafseer Ibn Katheer, 4/274]

“Say, “It is, for those who believe, a guidance and cure. And those who do not believe – in their ears is deafness, and it is upon them blindness. Those are being called from a distant place.” [Al-Fussilat, 44]

The meaning of these two Ayat complement each other. The general statement in Al-Fussilat is be detailed with the information found in Yunus. Thus, the question of the Qur’an being a shifa’ for the believer is primarily a healing and a cure all types of diseases affecting the heart. Imam As-Sa’di described this beautifully in his ‘Tayseer al-Kareem ar-Rahman’, 366:

“The Qur’an is a remedy for every disease of the heart. Whether it’s a form of disease that prevents man from obeying the Law of Allah; or disease doubts or discarding (and disparaging) of aqeedah and beliefs. Because in the Qur’an there is advice, motivation, warnings, promises and threats, which collectively trigger simultaneous feelings of hope and fear for the servants of Allah.

If his feelings motivate him to do good, and fear immorality for example, this will then continue to grow because he is keen to review (and understand) the meanings of the Qur’an – thus leading him to further implement the orders of Allah against any whispers of desires he may have. So he becomes a servant who is seeking the pleasure of Allah and not following lusts and desires.

Similarly, reading various proofs and arguments Allah mentions clearly. This will eliminate any confusion of thought that prevents accepting the truth or falling foul of sound beliefs, so that his heart becomes confident. When the heart is healthy, the disease of lust and doubts can’t harm it, and so will be followed by other healthy limbs of the body. Because the limbs of the body will be good, due to a healthy and kind heart; and will become damaged, due to damage suffered by the heart.”

Why you kill All Ants because of One Ant? →

NEW VIDEO: The believers are those when ALLAH is mentioned, feel a fear in their hearts →

Beautifying the Reading of the Qur’an →