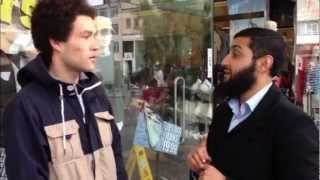 Politeness; an essential virtue of Da’wah

The fact that Allah Subhanahu wa Ta’ala Himself has asked His prophets to do Da’wah expresses its importance.

Invite (mankind, O Muhammad [SAW]) to the Way of your Lord (i.e. Islam) with wisdom (i.e. with the Divine Inspiration and the Qur’an) and fair preaching, and argue with them in a way that is better. Truly, your Lord knows best who has gone astray from His Path, and He is the Best Aware of those who are guided.[1]

And who is better in speech than he who [says: “My Lord is Allah (believes in His Oneness),” and then stands straight (acts upon His Order), and] invites (men) to Allah’s (Islamic Monotheism), and does righteous deeds, and says: “I am one of the Muslims.”[2]

A da’i (one who does da’wah) should have some qualities so that Da’wah is effective. First and the foremost is that he should not tamper with the message; convey the message as it is without any distortion. It is Allah’s Message; it should not be held back nor anything added to it. This means that the da’i should be honest and truthful.

And by the Mercy of Allah, you dealt with them gently. And had you been severe and harsh-hearted, they would have broken away from about you; so pass over (their faults), and ask (Allah’s) Forgiveness for them; and consult them in the affairs. Then when you have taken a decision, put your trust in Allah, certainly, Allah loves those who put their trust (in Him) [3]

Da’i has to remain calm and polite even when he is being insulted or ridiculed. He must remember that actually people are insulting the message, not him as a person. And even if they are, he should remember the Sunnah of all the prophets and particularly the words Allah said to Musa (AS) and Haroon (AS) when He ordered them to go to fir’oun and convey to him the message of Allah.

“And speak to him mildly, perhaps he may accept admonition or fear Allah. [4]

The pharaoh or fir’oun was the king who had so much power that his people worshipped him as a god. He had a massive number of Israelis as his slaves who built grand buildings for him. Musa (AS) and Haroon (AS) were asked to convey the following messages:

Just think for a second the extent of these demands. You are asking a powerful king to let go of all his slaves, all his power and to start being submissive to One Allah. Allah Subhanahu wa Ta’ala could easily have used His power or Force to make the pharaoh a believer, yet He chose to convey His message through a da’i and that too, politely.

Excessive and prolong preaching may turn people away from religion, hence it is imperative that a da’i does not overload the invited to boring and prolonged speech or speech that turns people away from you and worse, Islam. It is the wisdom (sunnah) of Muhammad (saw) to speak moderately, he (saw) did not prolong his speech nor was relaxed and negilgent in his speech.

Ibn Mas’ud (May Allah be pleased with him) used to preach to us once every Thursday. A man said to him: “O Abu Abdur-Rahman, we love your talk and we wish that you preach to us everyday.”

Ibn Masood replied: “There is nothing to prevent me from doing so, but i don’t want to incase i bore you, I follow the same method in preaching to you that Messenger of Allah (sallallaahu ‘alyhi wa sallam) adopted in preaching to us for fear of boredom.” [5]

Jaabir ibn Samurah said, “Both the prayer and speech of the Prophet were of moderate length. He would recite verses of the Quran and remind the people.” [6]

So, we should always remember that as Muslims we all are da’i . Our actions, words and dealings are not considered as merely the words, actions and dealings of an individual but of a Muslim. We should make politeness an integral part of our personality so that our work as a da’i gets positive response and may it help us win Allah’s Pleasure. Ameen.