sharesShare on FacebookShare on TwitterShare on WhatsApp
1
Parenting 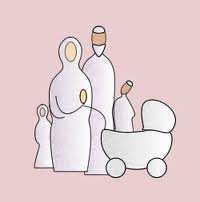 “O you who believe! Ward off yourselves and your families against a Fire (Hell) whose fuel is men and stones…” [At-Tahreem, 6]

1. Raising children is a responsibility that is shared by both parents. This is a trust which Allaah enjoins them to take care of, each according to his position and ability.

2. Commenting on part of the Ayah “Ward off yourselves”, Imam at-Tabari said this means to:

“Muqaatil said: This is a duty that he owes to himself, his children, his family and his male and female slaves. Ilkiya said: We have to teach our children and families religious commitment and goodness, and what they cannot do without of etiquette…” [Tafseer al-Qurtubi, 18/196]

4. Righteousness is something that should be inherited from the parents. It was Narrated by some of the Salaf that Dawud عليه السلام said:

5. As for discipline and teaching, Imam Nawawi said:

“The father must discipline his child and teach him what he needs to know of religious duties. This teaching is obligatory upon the father and all those in charge of children before the child reaches the age of adolescence…” [Sharh Saheeh Muslim, 8/44]

“How many people have caused misery to their own children, the apples of their eyes, in this world and in the Hereafter, by neglecting them, not disciplining them, encouraging them to follow their whims and desires, thinking that they were honouring them when they were in fact humiliating them, that they were being merciful to them when in fact they were wronging them. They have not benefited from having a child, and they have made the child lose his share in this world and in the Hereafter. If you think about the corruption of children you will see that in most cases it is because of the parents.”

“(For parents to discipline their child) when he reaches the age of discernment [e.g. 9 years of age] means that he should raise him with the characteristics of the righteous believers and protect him from mixing with evildoers; he should teach him the Qur’an and good manners and the language of the Arabs, let him hear the Sunnah and the sayings of the Salaf and teach him the religious rulings that he cannot do without…” [Fayd al-Qadeer, 5/327 – see also 2/574]

8. There are a variation of da’eef ahadeeth that report the Prophet صلى الله عليه وسلم as having said:

“It is a right for a child that his father should choose a good name for him and teach him good manners.” [Al-Bazzar and others – please note: All chains to such reports have been criticised and graded as da’eef by majority, but the meaning and implication of the text is correct and corraborated from other sound hadeeth]

9. One can also refer to the following recommended books with regard to raising children: