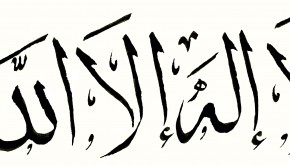 “Keep your tongue moist in the Dhikr of Allah.”

“The best of Dhikr is to say La illaha illallah.”

Kalimatil Tawheed, also known as Kalimatil Ikhlas, is the origin of establishing one’s Islam and also the basis of our sincerity towards Allah.

Question: how can one become constant and achieve consistency in saying it – especially during times when feelings of shyness overcome a person, or when one becomes hesitant or uncomfortable with people around him?

In his ‘Risalatil-Talkhees’, Ibn Hazm رحمه الله تعالى noted a very interesting observation regarding the kalimatil ikhlas (i.e. the statement of sincerity). He said:

“…and make abundant mention of لا إلـه إلَّا الله  for indeed these words are (made) by the movement of the tongue without moving the lips, so you won’t feel that (i.e. the lips move when sitting) in gatherings…”


In other words, all other types of adhkar can be seen from the lips when the person is saying them. This is not the case with ‘la illaha illallah’ because one can say this statement behind his teeth and without people around him noticing him saying it! This most praiseworthy and noble of speech reflects a sincere intention; and indeed when one becomes accustomed in saying ‘la ilaha illallah’ regularly, then he will be constantly reminded of its implications and live by its meaning. This would increase hope that one would die in a state in which all Muslims wish to leave this world; as the Prophet صلى الله عليه وسلم said, “A person whose last words are ‘la ilaha illallah’ will enter Jannah.”

May Allah make us all from them.