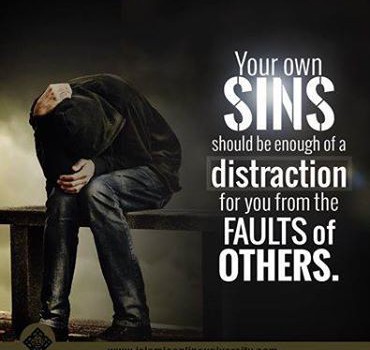 “O assembly of those who have accepted Islam with their tongues, and in whose hearts faith has not yet seeped. Do not harm the Muslims, and do not insult them, and do not seek out their defects. For verily, whoever seeks out the faults of his Muslim brother, Allah will seek out his secrets. And, whoever has his secrets sought out by Allah, Allah will disgrace him, even [if he hides] in the depths of his abode.”

Imam at-Tirmidhi recorded it in his Sunan (2032) and said it was hasan ghareeb, and he did not know of it except from the hadeeth of al-Hasan bin Waqid, who narrated from Ishaq bin Ibraheem al-Samarqandi, from Husayn bin Waqid Nahwah who narrated from Abi Barzah al-Aslami from the Prophet صلى الله عليه وسلم

The hadeeth was graded as hasan by Ibn Hajar [2]

Analysis of the hadeeth:

يا معشر من أسلم بلسانه (O assembly of those who have accepted Islam with their tongues). Within this phrase, we find Muslims and possibly hypocrites are also addressed.

This sentence {those who have accepted Islam with their tongues and in whose hearts faith has not yet reached} therefore includes a range of categories of people, but mainly the munafiqeen (and fasiqeen), and this appears to be closer to the true meaning as is found in the words of the Prophet صلى الله عليه وسلم “whoever seeks out the faults of his brother”, because there is no brotherhood between a Muslim and a hypocrite. The select opinion of at-Teebi limits the application of the hadeeth to the hypocrites.

لا تؤذوا المسلمين (do not harm (or hurt) the Muslims), meaning not to harm them for they are the ones who have accepted Islam with tongues and in their hearts. This would only reflect the imperfection of the one doing the harm.

ولا تعيروهم (and do not insult them). This word is derived from التعيير which means to taunt, or shame or slight over sins they may have committed in the past (unknowing whether they repented or not). Reproachment should be made at the time a person is committing a sin, or shortly after he committed it, or before he is contemplating to do so.

ولا تتبعوا (and do not seek out), meaning do not spy or go out of your way in trying to find faults and imperfections.

The word فإنه is to stress on the repercussion (for verily).

Words من تتبع (whoever seeks out) refers to the person searching, it comes in past tense verb form of ‘wazn tafa’ala’, containing the meaning of searching or seeking out.

Words عورة أخيه (defects/imperfections of his brother), intention (of the seeker of faults) may be hidden, but the outcome sought is to disgrace his brother.

The word المسلم (Muslim), implies a Muslim (in whose heart faith had entered) and this is in contrast to people who are faasiq (open sinners), in whose case it becomes necessary to alert and warn others from him.

The words تتبع الله عورته (Allah will seek out his secrets), meaning Allah سبحانه و تعالى will expose his nakedness and shame him. This is a form equating and means that Allah will open up the faults and shame a person, just as the person seeks faults and disgrace of his brother Muslim. And those whom Allah opens up to shame, will end up disgraced.

So the meaning of the hadeeth in summary alludes to those who like to look for other people’s fault, Allah will in return reward that person with open disgrace, and open him to shame and embarrassment, even if he is in the confines of his house.

Words ولو في جوف رحله (even if he hides in his abode) makes a strong emphasis that even if (the seeker of his brother’s faults) was hiding in the middle of his house.

“Verily those who love (to see) a very heinous act was spread among the people who believe, for them a painful punishment in the world and at the end.” [3]

Al-Ghazali (rahimahullah) said that spying and finding faults (and shaming) is from the fruit of prejudice against a (fellow) Muslim. And hearts will not be satisfied with allegations, so it causes (a fair person) to close the curtain on the matter… It is not permissible to eavesdrop (spy) in his home to hear the sound of music for example, and it’s also not permissible to go into his house to witness any sins that are committed, except what appears outwardly that is known by people outside the home, such as (open) sound of music or a person being drunk… Similarly when a person buys a container and puts alcohol in it, or hides musical instruments inside his shirt sleeves or pockets; if he sees it (in this covert way) he should not uncover (such incidents). The person should also not be sniffed in order to find the smell of alcohol, and should not ask the neighbours to find out what occurs in the person’s house (in terms of immorality).

And in the word ولم يفض الإيمان إلى قلبه (and in whose hearts faith has not yet seeped), then there is no hint to faith in one’s heart, nor has the knowledge of Allah (ma’rifatullah) been realised, nor has the rights of Allah been realised. Thus the cure for not knowing is knowledge, and this is the treatment for all the diseases of the heart as it reveals the rights of Allah سبحانه و تعالى and the rights of fellow Muslims – so one does not hurt, nor harm or try to dishonour them and indeed does not spy on their circumstances.

“Verily, Allah did not send me to fault-find nor to be obstinate. However, I was sent to be an easy-going teacher.” [4]

He صلى الله عليه وسلم is also reported to have said:

“If you want to remember the faults of others, then remember your own defects.” [5]

Commenting on this narration, al-Haythami said [6] that it means if you readily intend or take interest in speaking about (or being spoken to), about other people. This should be enough to remind and invoke ones own defects, which will stop you from driving a wedge into people, and having knowledge will ensure we restrain our tongues from mentioning the faults of Muslims. The idea of discrediting others while we ourselves are rarely free from defect.

“I am amazed at a man who (tries to) flee from destiny (al qadr) while he’s positioning himself against it! He sees a speck in his brother’s eye and leaves (noticing) the trunk in his own eye! He uncovers the malice in his brother and leaves (noticing) the malice in his own self! I have not entrusted a secret to anyone and then blame him for divulging it; and how can I blame him when it is beyond his capability?” [7]

“Whoever looks for the faults (and defects) of people, is blind to his own faults and from being concerned with Paradise, and the Fire (of Hell) is occupied with ‘qeela wa qaal’ (i.e. gossipers).”

Abu Bakr ibn al-Arabi (d.543H) said: “Do not flatter yourself by hiding your own faults and making your excuses known while denying it for others…”  That this fault-finding itself was a defect in people, which reflected their hatred and proved their ignorance and inhibited poor character and lack of modesty (and shyness) for Allah. Rarely is the same (kinds of) defects recognised in himself by which he would disadvantage himself . Thus part of being a good Muslim is to leave what does not concern him.

And indeed from our righteous predecessors, we have practical guidance in depriving shaytan any opportunity to instigate rancour between Muslims by avoiding situations that may lead to it. Abu Dharr al-Ghifari رضي الله عنه is reported to have given the following advice to someone who saw him sitting in the masjid by himself:

We also find words of profound wisdom that ensure we hold good opinions of one another, and ‘Umar ibn al-Khattab’s رضي الله عنه simple remedy in assuming husn dhan was to:

“Do not think badly of a word uttered by a Muslim when you can find a good interpretation for it.” [9]

And from the wise words of Haatim al-‘Asamm is as he said:

“When you see a fault in your brother, if you hide it from him then you have betrayed him; if you say it to someone else then you have back bitten him; if you face him with it then you have made him feel cornered.” So he was asked, “So what should I do?” He answered, “Tell him in a disguised indirect (indicative) way.” [10]

So let us all guard our tongues and bewares of its fatal consequences [11]. Let us all avoid conjecture and suspicion [12] and also be more concerned with our own faults and remedying our own short comings than seeking out to shame others. For indeed as the Prophet صلى الله عليه وسلم said – مَنْ صَمَتَ نَجَا – “Whoever keeps silent is saved” [13] because the result of the tongue’s unnecessary indulgence leads to one’s ruin.