sharesShare on FacebookShare on TwitterShare on WhatsApp
32
Adab 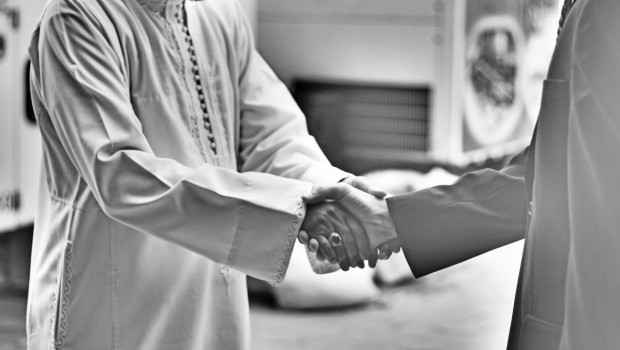 Being Patient with People

Being Patient and Tolerating People.

“The Fire is made forbidden for every light, lenient and easy-going (person) who keeps close to people.”

It is unfortunate to find people who staunchly follow the Sunnah, and all the while their manners and etiquette contradict what they so passionately guard. This is not only a recipe for disaster when calling others to the Sunnah, but counter-productive in driving people away.

1. Al-Manawi said in his ‘Fayd al-Qadeer’ (4/105) that this means to carry oneself calmly and with dignity, and not being distracted by people who may disparage him or annoy him. ‘layn’ (lenient) emphasises softness over roughness… and ‘sahl’ (easy-going) means going about one’s needs while continuing to command (the good) and forbid (the evil) – i.e. his easy-going nature does not result in being flexible or taking liberties when it comes to following and promoting the Shari’ah.

Al-Mawardi said that this hadeeth promotes husn al-khuluq (good manners) that will enter a person to Paradise and remove him from the Fire. Good manners are an aspect of people’s easy-going temperament (and disposition)…

2. It is unfortunate to find people who staunchly follow the Sunnah, and all the while their manners and etiquette contradict what they so passionately guard. This is not only a recipe for disaster when calling others to the Sunnah, but counter-productive in driving people away. Allah سبحانه و تعالى Said to the Messenger صلى الله عليه وسلم :

“And by the Mercy of Allah, you dealt with them gently. And had you been severe and harsh-hearted, they would have broken away from about you…” [Aal-Imran, 159]

3. This profound Ayah provides a blueprint for the type of characteristics one should adopt in dealing with people around them. Not only does it call for being polite and gentle and overlooking their faults and seeking Allah’s guidance for them, it also asks for one to be empathetic to their situation and to discuss their affairs in bringing about mutual understanding and reasoning. Qatadah said about the words: ولو كنت فظا غليظ القلب لانفضوا من حولك – that Allah cleansed him صلى الله عليه وسلم from (using) vulgar language and cruelty and made him (become) closer to the believers through his (adapting of) mercy…” (see Tafseer at-Tabari, 8120). This can only be achieved when one excels in morality.

4. Knowing the truth is not enough, the way it is presented makes a huge difference (and reflects our own understanding/practice of it). Allah سبحانه و تعالى continued in the same Ayah and Said: “…and consult them in the affairs…” – This is a directive to empathise and discuss and deliberate in matters that affect them and work with them to find solutions. And if they attack you or shout you down, then assume a posture of dignity and do not let their actions and words lead you to follow suit and reply in kind.

This narration has many profound benefits:

i. The word أذاهم means more than injury, it denotes every type of damage or offense or annoyance caused by people, whether physical, verbal or mental. The most glaring example would by the bitter harsh experience of the Prophet صلى الله عليه وسلم himself when he travelled to Ta’if to invite its people to Islam. His صلى الله عليه وسلم attitude and manner in face of severe physical injury and verbal attacks suffered at the hands and tongues of the people epitomises a moral standing in the history of this Ummah that will continue to guide Muslims until the Last Day.

ii. Scholars explained that any suffering experienced by a person while standing for the truth is greatly rewarded, and that patience, compassion and mercy must not be compromised when delivering the message of Islam.

“And whosoever shows patience and forgives, verily that would be from (the resolute) things recommended (by Allah).” [Ash-Shoorah, 43]

May Allah make us among the light and easy-going people who have tonnes of sabr and much hikmah when associating and dealing with people around us.