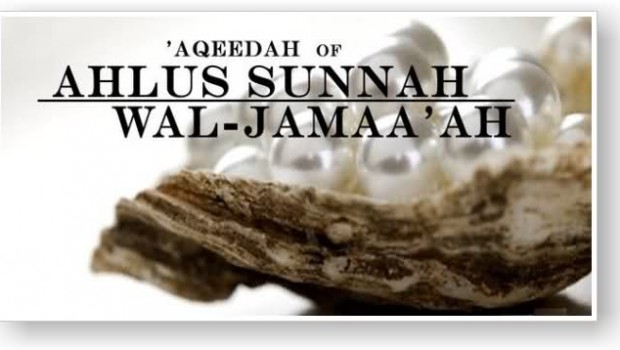 The Arabic word ‘Aqeedah stems from the root ‘aqada, which conveys meanings of certainty, affirmation, confirmation, etc. In the Qur’an, Allaah Said:

“Allaah will not punish you for what is unintentional in your oaths, but He will punish you for your deliberate oaths (bimaa ‘aqqadtum al-aymaan)…” [al-Maa’idah 5:89]

The verb paraphrased here as “deliberate oaths” is ‘aqqada/ta’qeed, which refers to when one has determination in the heart. It may be said in Arabic, ‘aqada’l-habl (the rope was tied), i.e., it was pulled tight together. The word i’tiqaad (belief) is also derived from this root, and has the meaning of tying up and making strong. The phrase a’taqadtu kadhaa (I believe such and such) means: “I am convinced of it in my heart; this is a rational conviction.” [See here}

The verse that comes after the ‘greatest’ verse in the Quran, Ayatul Kursi says:

“…Whoever disbelieves in Taaghut and believes in Allah, then he has grasped most trustworthy hand-hold that will never break. And Allah is All-Hearer, All-Knower.” [al-Baqarah (2) : 256]

Believing and affirming in Allah and then worshipping others has no benefit, you must come with negation and affirmation both in your inner and outer. It is reported in the Tafseer of Ibn Katheer in relation to the above verse,

“…then he has grasped most trustworthy hand-hold that will never break.”

Saeed bin Musayab and Al-Dahaak said: “the hand-hold means there is no god except Allah.”

Ibn Katheer said: “…The use of the word ‘hand-hold‘ indicates something that is fixed, will not ever break which has been tied firmly.”

The Arabic word ‘Aqeedah is derived from al-Aqad, which means to ‘tie something (firmly), so when the Muslim disbelieves in Taaghut and believes in Allah, then he has sound Aqeedah that will never break, in sha Allah.

There is nothing heavier than the wordsLa illaha illallah (there is none worthy of worship except Allah) on the scale of good deeds, it is the best Dhikr, the purpose of your existence, guarantees the Muslim into Paradise and means of forgiveness. The following Hadith of Bitaqah supports this .

Kalimatil Tawheed, also known as Kalimatil Ikhlas, is the origin of establishing one’s Islam and also the basis of our sincerity towards Allah. The Messenger of Allah صلى الله عليه وسلم said:

“The best of Dhikr is to say La illaha illallah.”

The Qur’an clearly points to the fact that ‘Aqeedah must be associated with good conduct, for five daily Salah (prayer) is a proof of the presence of La illaha illallah (there is none worthy of worship except Allah) in the heart. Imam Qurtubi in his tafseer said:

“Emaan cannot exist except by declaring there is no god but Allah and nothing can be equivalent to it from the actions and statements except the prayer.”

May Allah guide us to establish the sound ‘Aqeedah in our hearts that will never break and Emaan that is coupled with Salah (prayer) and good deeds.

ALLAH DID CONFER A GREAT FAVOUR →

Can one Distinguish between ‘Aqeedah and Manhaj? [Ibn Uthaymeen] →

Emaan, and Its Role in Our Lives →

Most amazing in belief… →

Having doubt and kufr (disbelief) thoughts, is it kufr or not? →