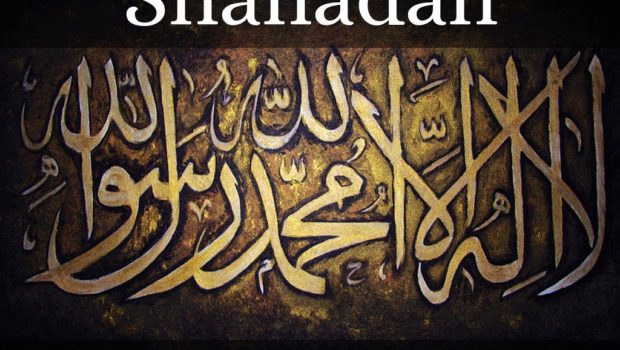 Whoever says he is a Muslim, he must pronounce the Shahadah with his tongue and whoever never pronounced his Shahadah is not Muslim. We will bring evidence so that this condition has effect and we can appreciate the first condition of La ilaha illallah.

“When Abu Taalib was entering his deathbed the Prophet (saw) came to his side and found Abu Jahl and Abdullah ibn Abie Ummayah al-Mughira. He (saw) said, ‘O my uncle! Say there is no god but Allah (swt) by which I will be able to testify for you in front of Allah (swt). Abu Jahl responded,‘O Abu Taalib! Are you going to reject the religion of Abdul Muttalib?’ The Prophet (saw) continued to encourage his uncle to say the Shahadah until Abu Taalib said his final words to them, ‘He is on the religion of Abdul Muttalib,’ and rejected to say there is no god but Allah (swt). When this came to pass, the Prophet (saw) said, ‘By Allah! I will continue to beseech Allah (swt) for Abu Taalib’s forgiveness until I am ordered to do otherwise.’

Allah (swt) then revealed, ‘It is not fitting, for the Prophet and those who believe, that they should pray for forgiveness for Pagans, even though they be of kin, after it is clear to them that they are companions of the Fire.’ [Surah at-Tauba (9) :133] and Allah (swt) also revealed to the Prophet (saw), ‘You cannot guide whoever you so will, it is Allah (swt) who guides whom He wishes.’ [Surah Qasas (28):56]” [Agreed Upon]

This Hadeeth gives evidence to the condition of pronouncing the Shahadah by its words. Even though Abu Taalib believed Muhammad (saw) was the Messenger of Allah in his heart it was not sufficient for him until he pronounced the words with his tongue, this is why Muhammad (saw) was encouraging him to say ‘O my uncle! Say there is no god but Allah (swt) by which I will be able to testify for you in front of Allah (swt).’

This is the sunnah of Muhammad (saw) is to say to the one on his deathbed to pronounce La ilaha illal lah by its words.

So when Muhammad (saw) said this, his two uncles said to Abu Talib, ‘O Abu Taalib! Are you going to reject the religion of Abdul Muttalib?’

He (saw) kept repeating and hoping that Allah will guide him until Abu Talib’s last word was ‘I die on the deen of Abdul Muttalib.’ So he died on Shirk. He (saw) said, ‘By Allah! I will continue to beseech Allah (swt) for Abu Taalib’s forgiveness until I am ordered to do otherwise.’

It is important to mention that Abu Talib had a great role to play in the da’wah, so he (saw) didn’t want to forget that. He (saw) kept asking Allah (swt) to forgive him until Allah revealed the following verse,

‘It is not fitting, for the Prophet and those who believe, that they should pray for forgiveness for Pagans, even though they be of kin, after it is clear to them that they are companions of the Fire.’ [at-Taubah (9) :133]

So anyone who dies on Kufr and Shirk, it is haram to ask Allah forgiveness for him. Allah (swt) says,

So the lesson we should learn is, despite all he (Abu Talib) did, such as help, support and protect the Prophet (saw) it did not benefit him. The matter of guidance is not in our hands, and the role of Muhammad (saw) is conveying the people to the straight path. Hidayah and Tawfiq is not from people, it is from Allah (swt) and the one whose hand controls hidayah is Allah (swt).

When Abu Talib passed away, Ali (ra) said ‘My misguided father has passed away.’ Muhammad (saw) said to Ali, ‘Go and bury him’, he (saw) didn’t give him Janazah because Janazah is only for Muslims.

We can learn from this incident is that our allegiance is the aqeedah we carry and our heart is not upon those who disbelieve even if they are your father, uncle or brother.

“I have been commanded (by Allah) to fight the people until they testify that there is no god but Allah and that Muhammad is the Messenger of Allah, and they establish regular prayer and pay zakaah, then if they do that, then they save their lives and property from me except for Islamic laws and then their reckoning will be with Allah.” [Agreed Upon]

This hadith mentions the importance of pronouncing the shahadah, Imam Nawawi said,

“From this we understand that one of the conditions of Emaan is to pronounce the two testimonies of faith in addition to believing in them and believing in all that the Prophet (saw) came with.” Sharh Saheeh Muslim, Vol. 1 Pg. 212

“If one has capability to, but does not say the two testifications of faith he is a disbeliever by the unanimous agreement of all Muslims; and he is a Kaafir inwardly and outwardly according to the Salaf of the Ummah, their leaders and the Jumhour of the scholars.” Majmou’ al-Fataawa Vol. 7 Pg. 609

Is there anything which can replace the Shahadah as evidence of a person’s Islam?

“Emaan cannot exist except by declaring there is no god but Allah and nothing can be equivalent to it from the actions and statements except the prayer.”

‘(The scholars) have unanimously declared that if a person who is previously known as a Kaafir is seen to pray the prayers of the Muslim on time and regularly and no-one has heard from him the confirmation (of the Shahadah) by the tongue, that he is judged as someone with Emaan (i.e. he is Muslim). However, they did not judge likewise in the case of fasting or giving Zakaah.”  Tafseer Jami’ Quran, Vol 8 Pg 207

The Ulema agree comprehensively on this unlike any other matter, and say, anyone you know is a Kaafir (disbeliever) and you one day find him establishing the Salah, even if you haven’t heard the shahadah from him, he is a Muslim. There is nothing that can exchange and more equivalent to the shahadah except Salah.

“Whoever prays our prayer, faces our Qibla and eats our slaughtered meat is a Muslim under the protection of Allah (swt) and His Prophet (saw).” Bukhari

This hadith explains that someone who prays is a Muslim and it is relevant to mention as well that the shahadah is uttered in the tashahud of the Salah.

If someone says, ‘Assalamu Alaykum wa Rahmatullah.’ in Darul Kufr (land of disbelief) you must act as if he is Muslim unless you see clear Kufr Buwah (Explicit Disbelief) manifest from him. It is dangerous to doubt Muslims and declare him Kaafir without proof, and making takfir on Muslim without proof is as though you have killed him. The Prophet (saw) said,

“If a man says to his brother, ‘O disbeliever!’ He has killed him.” Agreed upon

“Declaring the blood of those who pray-who are upon Tawheed to be permissible is a serious danger. The mistake in leaving one thousand Kuffar is easier than the mistake of shedding the blood of one Muslim.”[quote taken from Qadi ‘Iyad in ash-Shifa]

So, it is better to make mistake in Ijtihad by declaring a thousand people Muslim than to call one Muslim Kaafir. You might argue both are mistakes, so why make a distinction?

1. You have declared him Kaafir

2. You have made his blood halal and broken the brotherhood.

“Killing a Muslim is greater in front of Allah (swt) than the destruction of the whole earth.”[Sunan Nisa’i]