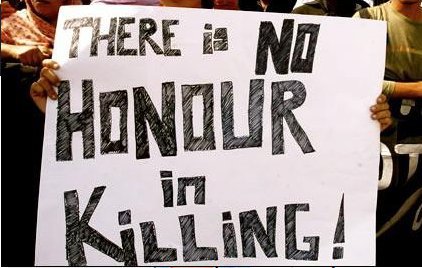 Honour Killing: This story made the Prophet cry

Once there was a man who led a normal life; talking, laughing as all people do, but suddenly started to cry for no apparent reason and he would cry so much that sometimes he would become unconscious. Some companions of the Prophet brought him to Prophet Muhammad (SAW) so that he might be cured by the Prophet’s (SAW) dua. Prophet Muhammad (SAW) took him to a side and asked him what the matter with him was. He replied that he had done a terrible crime but he had not told it to no one, but since the Prophet (SAW) was asking him himself, he would tell his story. The following is the story of the man.

When I had not embraced Islam, a daughter was borne to me. When I heard the news of her birth, I wanted to bury her as was expected of me. My ancestors had done the same because it was considered better to kill the girl at birth before she could run away with someone in youth and bring shame to the whole family. The culture and tradition demanded that I bury the daughter as soon as she was born, but my heart had already developed feelings for the child and I could not do so. Time went by, and she grew day by day. Every day, I felt an urge to kill her but every day the fatherly love wrestled with the thought and put it to rest. But when she came to the age of becoming a lady, the thoughts of her running away and bringing shame to the whole family started to haunt me every second of the day. It grew so unbearable that I could not rest; I could not sleep or eat. One day, I asked my wife to dress her in nice clothes and get her ready and tell her that I was going to take her out so she could play with her friends. Although my wife did the same, but somehow she sensed this was not what I intended to do. She kept on crying silently while she combed my daughter’s hair and dressed her. My daughter, on the other hand was delighted that I was going to take her out.

When she was finally done and I was about to leave, my wife mustered up enough courage to come up to me and whisper in my ears, ”Don’t lose your trust!”

I rushed out of my house with my daughter and started on my way. I had no plan; my mind was in a state of confusion. Should I kill her or not? If I should, then how? Suddenly I saw an old deserted well that I knew was filled up with sharp stones. Should I throw my daughter in the well? My heart and mind were going in two opposite directions. My mind told me to kill her as she would bring shame to me one day while my heart kept on fighting but the fatherly love grew weaker and weaker. All this while, my daughter had been running around me, talking to me about things she would do with her friends oblivious to what a turmoil I was going through. I could not stand it no longer; I grabbed her and pushed in the well.

She must have been surprised, but all she could say was “Don’t lose your trust!” and this is what she kept on repeating until I could hear her no longer.

When the man finished his story, he looked up and saw the Prophet Muhammad (SAW). The Prophet’s (SAW) beard was soaked with tears and he said that “If He had been allowed to punish a person for his crimes before embracing Islam, that man would have been the first one to get punished.”

It was narrated on the authority of Jaabir (RA) that the Prophet (SAW) said: “Whoever has three daughters whom he gives refuge to, provides for and shows mercy to, Paradise is certainly guaranteed for him.” A man asked, “And (for) two, O Messenger of Allaah?” He replied: “And also (for the one who has) two (daughters).” [Ahmad] [Al-Bukhaari in Al-Adab Al-Mufrad]

It was narrated on the authority of Abu Sa‘eed (RA) that the Prophet (SAW) said: “No one has three or two daughters or sisters, and he fears Allaah regarding them and is kind to them, except that he will enter Paradise.”

It was narrated on the authority of Anas (RA) that he said, “The Messenger of Allaah (SAW) said: ‘Whoever has two daughters or sisters to whom he is kind as long as they are with him, he and I will be in Paradise (as close to each other) as these (and then he put two of his fingers together).”

Let this be a lesson for all of us who look down and have shame up on their daughters and sisters and commit this despicable crime of honor killing, which made the Muhammad (saw) cry.