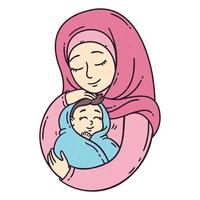 THE READ TO YOUR CHILD SERIES PRESENTS( MOTHER)

Islam appreciates and highlights the value of mothers highly and greatly. Islam makes the route to paradise  paved with the content and satisfaction of one’s mother. (tarteelequran) The Holy Qur’an gives vivacious  pictures of virtuous mothers who sacrificed everything for the safety, security,  the welfare and comfort of their children. It portrays vividly the picture of the mother of prophet Moses and how she was so anxious, terrified and cautious for the safety of her new- born baby boy Moses, because the overwhelmed pharaoh had decreed to end the life  of each and every new born Hebrew boy. This was because his fortune- tellers had foreseen that his kingdom and reign would end at the hand of a Hebrew boy who would be born soon. So, the soldiers of Pharaoh began to search every Hebrew house for any new born boy.(tarteelequran) Here came the salvation from Allah  when Allah inspired the mother of Moses ‘to suckle him, if she feared for him, to put him in a wooden box,  throw it into the Nile; and not to fear or worry; because Allah had given her the good news that Allah would return Moses safe and sound to her. Moreover, Allah promised her that Allah was going to make Moses a messenger of His. Yet, a mother is always a mother. She couldn’t help being worried, till her heart became empty of every feeling and emotion, except for fear and anxiety. She sent her daughter, the sister of Moses to collect news about the baby. Allah reminded Moses and the mother of Allah’s favour when the family reunion took place , after all the suckling mother couldn’t suckle Moses. Hence, it was the only way to return the baby to his mother, especially when the sister said to the folks of the Pharaoh ‘ May I tell you about a woman who can suckle him for you, as they are very keen and careful?’  Allah is the most compassionate  and has mercy on both the baby and the mother.( tarteelequra)

One day, prophet Mohammad was walking in the street when he saw a mother holding her baby at her bosom.  The prophet soon asked his companions, saying: ‘Do you think this mother could throw her baby into a fire?’ They soon and in one voice replied, ‘No, never and no way.’ The prophet commented saying; ‘Thus is Allah. Allah is more merciful and compassionate than the most merciful mother.’ and it is true the prophet was always truthful. Also, it is narrated that a man was doing tawaf around the Holy Shine, Al – Kaaba, carrying his mother as a kind of parental gratitude. The man saw the companion Abdullah Ibn Omar nearby. He went to him and said: ‘I have made myself her tame and obedient camel. Do you think I have rewarded her? Abdallah Ibn Omar replied, ‘ Far away, whatever you do, you can’t even reward a single sigh of hers while giving birth to you.’ It is also narrated that a man came from Yemen carrying his mother on his back and said, He saw Omar Ibn  Al- Khattab, and said; ‘My mother has grown so old that she can’t ease herself or answer the call of nature without mounting on my back. I willingly do, have I rewarded her yet? Omar replied, No, because she had done this to you wishing you good and long life, while you are doing so, wishing her death soon. Finally, it is narrated that prophet Mohammad once said, ‘A child can’t reward a parent, only except  when that child finds that parent as a slave or a war captive and the child frees the parent after paying the ransom.’ So said the prophet, and he was always truthful [PBUH].( tarteelequran)

Worldly speaking, we can say that mothers make us, i.e. mothers form the fundamentals of our characters and psychological status.  We are the children of our mothers. When you want to know someone’s  character, see who his mother is. Mothers don’t just breast- feed us, they formulate the flesh,blood, bone and marrow of our personality. So, you are not but the outwork of your mother. In short, you owe everything to your mother, and consequently your parents.  (tarteelequran)