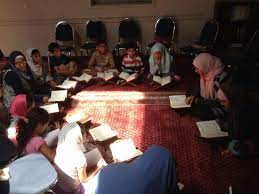 “I don’t think it was necessarily a sense of shame or a lack of pride, but something that just isn’t spoken about. Everyone is so busy with their day to day chores and responsibilities, histories might only be shared in passing, but not in-depth or documented,” she says.

One example is the creation of prayer spaces and mosques. The post-war generation may have “arrived from Muslim majority countries, creating a community that developed from nothing”, Ahmed says, “but it didn’t mean that they were Islamic scholars, architects or designers”.

That came later, through the next generation of Muslims, who, among other things, questioned the limited space for women’s prayer areas that were created by the first wave of Muslim migration, and have redesigned mosques of today with inclusivity.

The birth of an archive

Ahmed’s ultimate goal is to create a museum or “museum-style” learning space, but she realised there was a more immediate need to create something “more tangible” that has “historical significance”.

And so EMHAI was born.

“Archives are what a legacy is built on, and these are what my community was missing. I soon realised that the archives are our legacy.”

So far, Ahmed has recorded 112 oral histories, a series of recorded interviews that document and collect memories and personal commentaries of historical significance.

“When we started, it was difficult, it would take weeks and months to get people to agree to an interview. And to explain to them what it would entail and why we’re doing this.”

Funeral prayers in Pakistan [Photo courtesy of Everyday Muslim Heritage]Ahmed started by interviewing friends and family, and then the project grew through word of mouth and social media, which has meant she can “connect to a wider audience”.

Before the COVID pandemic, Ahmed or one of her 10 volunteers – who are all trained in interview techniques – would usually speak to the contributors in the comfort of their own home.

“We have a whole process. It’s not just walk into someone’s house, do an interview and walk out again. It’s something that you have to have emotional involvement in, you have to be emotionally present,” she explains.

Some interview set-ups can take weeks or months. “There was one time where we were trying to get a photograph from someone. And just to get that photograph, it took us 18 months.”

A template is used to ensure everyone is asked a similar set of questions, with room for individual stories. Each interview takes just more than an hour.

“… It’s about being a person who happens to be Muslim,” she says. “It’s about setting that person, their experience in the context of British history, showing how we live our lives.”

One of those interviewed was 50-year-old Rakin Fetuga, one half of the hip-hop group Mecca2Medina. He says the only part Islam played in his childhood home in London’s Notting Hill during the 1970s, was a picture of Mecca on his living room wall. For him, being Nigerian and British came first; being Muslim came later.

Rakin Fetuga (left) believes an unedited history of Britain needs to be narrated [Photo courtesy of Everyday Muslim Heritage]Fetuga believes parents must teach their children history at home rather than relying solely on schools. He cites the stories of Marcus Garvey, Malcolm X and Harriet Tubman, but he also says the history of being African in 1970s’ Britain must also be taught.

“We need to teach our children that when we came here in the 70s on the doors it said ‘no Blacks, no Irish, no dogs’. They need to understand the history because the children growing up today in the classroom, you say something, they’re like ‘That’s racist’. I say to them, ‘Excuse me, you don’t even know what racist is’.”

EMHAI has created three archives including the first British collection of stories and memories of the Black, African and Afro-Caribbean (BAAC) Muslim community in London.

She hopes to create more focussed projects on different communities, like the Somali and Nigerian communities, but does not have the funding for it at the moment.

Ahmed’s work has inspired others to collect and curate their own histories.

“That’s what I really wanted Everyday Muslim to be, to inspire others to do this,” she explains. “Because it’s not just one person’s job, one organisation’s job, it’s definitely a community responsibility. And it’s taken some time to get to a point where people are beginning to realise the value of their stories.”

Not expecting to stay

The EMHAI archives are a collection of video or audio oral history interviews, transcripts, photographs, documents and ephemera and are partially catalogued and archived in locations across the UK, including Bishopsgate Institute and Vestry House Museum.

We Weren’t Expecting to Stay, is another of its collections. This one documents the lives of Britain’s largest Muslim group – south Asians from 1950 to 2015.

“Their families joined them and their children were born in the UK, making this their ‘home’. They started to feel more settled and integrated here. They valued the justice system, meritocracy, and equality that the UK offered them,” says Sundas Ali, the co-author of Identity, Belonging & Citizenship in Urban Britain and lecturer in Politics and Sociology at the Oxford University.

In We Weren’t Expecting to Stay, colourful photo galleries capture moments – from births and children’s parties to young men dressed in their finest posing beside famous London landmarks.

Food is a common theme that weaves through the archives, with many mentioning the difficult quest to find halal meat in 1960s’ Britain.

The Everyday Muslim project has created three archives capturing the ‘everyday’ moments in people’s lives. Food is a recurring theme [Photo courtesy of Everyday Muslim Heritage]One interviewee remembers receiving parcels of it sent to his west London home from Bradford where there was a more established Muslim community. Another recalls a kind Jewish butcher in east London who allowed Muslims space to slaughter chickens on Sundays.

“Through hearing the stories from the project, I appreciate how we can take everyday decisions or actions for granted, such as buying halal meat,” says Ahmed.

“It also made me realise that if such basic experiences are unknown, then there is a disconnect between generations that results in a loss of connection to their culture and heritage.”

With love, from Walthamstow

Another contributor, Nazeea Elahi, 46, tells how her father’s encounter with a London cabbie led to her family settling in Walthamstow.

Fazal Elahi was 36 when he arrived in London from Pakistan, leaving behind his wife and four children aged below 10.

Fazal Elahi’s passport [Photo courtesy of Everyday Muslim Heritage]“[My father] had no fixed address to go to [when he arrived at Heathrow in 1963], all he knew was that he had a cousin living somewhere in Bradford. Having no idea where Bradford was in relation to London, my father went to a taxi driver at [Heathrow] airport and requested to be taken to Bradford.

“The taxi driver laughed and said it was too far and to give him an address in London instead. My father replied that he didn’t know anyone in London.

“He asked the driver if he knew a house in London where Pakistani people were living, if so could he drop him there. The taxi driver took him to a house near Queens Road, Walthamstow. That was how my family ended up living in Walthamstow instead of Bradford.”

Mariya bint Rehan, 34, whose parents came from Pakistan’s Punjab region, offers a sensory description of her own childhood memories of her father’s corner shop. She remembers “a lukewarm strawberry Yazoo straight off the cash and carry floor at the end of a gruelling wait, the sweet smell of cardboard which flooded the shop and the lost taste of a Snickers bar from the 90s”.

After selling his corner shop he went on to own several small businesses including a small property company. While her mother taught English in female prisons and now owns her own haberdashery in north London.

Open all hours, corner shops like the one Rehan’s father ran were often used as comedy material for racist “jokes”. But Rehan says she wants to redefine the stereotype, telling EMHAI: “I … want to reclaim the reductive stereotype of the ‘Indian’ corner shop, and its subsequent reinterpretation as noble, ingratiating support characters in someone else’s story.

“I want to replace it with my dad and his resolve in creating a better life for my siblings and I. I’m pleased to say my spine now unfurls in pride over the memories of being the daughter of a remarkable corner shop owner.”

But racist jokes were not all people of Rehan’s father’s generation – and earlier arrivals – had to worry about.

Ansari describes how there was an “anti-immigrant sentiment that started to spread among layers of white society, as did racism towards minority ethnic communities, reaching a crescendo in Enoch Powell’s ‘River of Blood’ speech in 1968 in reaction to the arrival of South Asians from East Africa”.

“Residentially concentrated and segregated, South Asian Muslim communities suffered the full force of racism. They were blamed for not integrating into British norms and values,” he adds.

In the 1950s and 60s, Muslims in Britain were largely identified in ethnic rather than religious terms – as Pakistanis, Arabs, Yemenis and Somalis. They experienced systematic marginalisation and rejection in employment, housing and education primarily on grounds of their ethnic heritage, Ansari explains.

This led to “skinhead ‘P***-bashing’ but also violent attacks on mosques. In the changing context of the following decades, the focus of racism shifted and it is arguable that the foundations of today’s Islamophobia were being laid in those decades”.

Navid Akhtar (far left) as a child [Photo courtesy of Everyday Muslim Heritage]Navid Akhtar, 54, the founder of Alchemiya, a Muslim content streaming service and a contributor to the archive, recalls his own experiences with racism growing up in 1970s’ Britain.