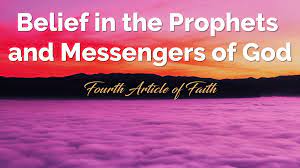 THE ITEMS OF FAITH

– Allah is the All High and Supreme has never been seen or heard. Yet the connection and communication between humans and their lord has never been cut. The medium of communication was always in the form of messengers and prophets. They are well selected and carefully chosen males. No prophet had been reported to have been a woman. The Holy Quran states that they were men who never considered their mission as  a privilage . Rather it was a hard and nerve- consuming job, especially when dealing with stubborn hostile minds. There were many reasons why their missions were rejected.  One main reason was envy, as many people thought it was remarkable to be a messenger or a prophet. It was often said, ‘Only if a greater man amongst us, we inhabitants of the two towns, Mecca and Taif ?’ Another reason for rejection was that the call to worship one god, Allah, would prevent them substantial worldly benefits, either financially or socially. Being all slaves of Allah meant that all humans are equal. Fancy such a call in a society based on classes of  a master – slave relationship. Also, as a materialistic and unadvanced society, believing only in the existence of what could be seen, many people found it difficult to believe in Allah, whom they said they couldn’t see. So they often asked, ‘Show us Allah in front of our eyes. learn tajweed online

Many prophets were reinforced by miracles from Allah, so instead of yielding and embracing the true religion, the disbelievers accused many prophets and messengers of being magicians and sorcerers. The Arabs were eloquent and appreciated rhetoric, however when the holy Quran came to them as a stunning miracle, they were quick to accuse Mohammad of being a poet. In addition, many prophets and messengers were either tortured or killed.            learn tajweed online

Allah has never left humans without guidance, so He began the series of prophets and messengers since the first man, Adam, who was also the first prophet. The only and eternal message has always been that: ‘There is only one god, Allah, a message conveyed by all and every prophet and messenger. Nevertheless, over time people either forgot or altered the original message. So every now and then a messenger was sent to remind people and renew the message. Throughout history ,there evolved three acknowledged heavenly religions. They are Judaism of Moses, [PBUH], Cristianity of Jesus Christ,[PBUH], and Islam to which Mohammad [PBUH] called. learn tajweed online

All prophets and messengers were brothers, though they appeared and lived at different times. The last prophet to come was Mohammad, however no considerable man could claim to be a prophet or a messenger. Though Mohammad had declared openly that he was the last prophet, after whom none will come, a fact that verifies that he was a truthful prophet and messenger. But why would the series of prophets and messengers be concluded at the hands of Mohammad [PBUH]?  The answer is both clear and simple: Mohammad had come with the seal and perfect religion which suits all humans everywhere and all over time. learn tajweed online

The prophets and messengers mentioned in the Holy Quran are twenty four, but the Holy Quran states that there were  so many others, not mentioned. To sum up, prophets and messengers were virtuous men of flesh and blood. They ate, drank, married, had children, lived and died. They spent their lifetime conveying Allah’ message, enduring all kinds of suffering and hardships. They worked for the good of humanity. So we should respect and believe in them all. Muslims do not differentiate between them all.learn tajweed online